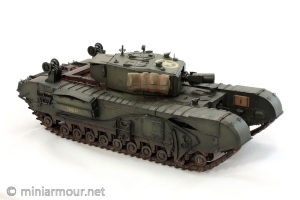 This is Churchill AVRE Mk.III by AFV of course. I have built it also some year ago.

The kit was bit of a mixed bag. Some parts were very well done and overall model has very nice details. I liked the running gear, which is very detailed and realistic. The kit is bit overcomplicated in my opinion and needs a lot of dry fitting during the construction. This is sometimes extremely difficult due to the high number of parts into which it is broken down. Example: Upper track guards are made of three parts. These need to be aligned perfectly with the main hull body, both in front and at the back, even small misalignment  may cause noticeable gaps at one end. But dry fitting 4 parts at the same time is not that easy unless you have an extra pair of hands.

I would also welcome bit more detailed instructions. I have for example spent quite some time trying to eliminate a gap between the front and middle track guards, only to stumble upon photograph which clearly showed the gap is actually supposed to be there…

In addition to the AFV kit I used Friul tracks and Voyager photoetch parts. I also added tarps on the turret sides. Molded-on tie-downs on the turret were replaced with the ones made from wire and the straps are made from the Tamiya masking tape.

Looking at the paint job now, I can only say it is mediocre at best and does not do justice to the kit itself in spite of all its shortcomings.

Problem is the usual one that occurs when one uses oil washes for weathering as much as I do – you have to paint the model much lighter so that after all the washes it is still not too dark. Which I didn’t in this case. So at the end model is too dark and lacks contrast.

The markings are of those of 26th Assault Squadron of the 5 Assault Regiment on D-Day of 6 June 1944. This squadron was supporting landing of the Canadians from the 7th Infantry Brigade on the Juno beach in front of the Courseulles-sur-Mer. 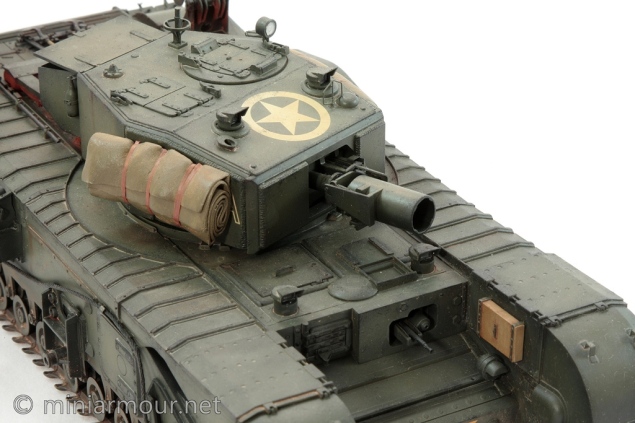