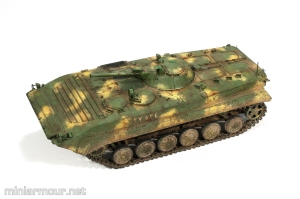 As I have previously mentioned, after taking BMP to Ajax in October, I didn’t feel happy with the look of the model. It felt too flat, in my view mostly as a result of pigment application.

So to fix the model, I have started by airbrushing the model a layer of clear Tamiya acrylic thinner, this has toned down the effect of pigments and gave me good starting point for more play with oil paints.

I stuck to my trusted palette and added local mapping with Burnt Umber, Black and Naples yellow and few other yellow and brown-colored paints. I have also added streaking, mostly on the vertical surfaces and on the sides of the rear hull, using the periscopes and weld lines as a focus points – dirt and grime would accumulate here and in combination with rainwater create streaks in direction following slope of the armour.

After being happy with the added depth, I retouched the aluminium chipping and finally added mud stains. These were added by mixing AK’s earth and dust effects with plaster to create mix with some volume and this was applied by splattering it against the hull side with brush. I tried to control the application, so that the mud would not be splattered too high on the model, but still have rather gradual transition between bottom edge of the armour walls and upper parts of the model. I was bit more aggressive at the rear, were the tracks would splatter the mud higher than on the sides and front.

That concluded the process and after bringing the model to HeritageCon last weekend, it was definitely declared finished.

I can’t say that I am 100% happy with the look, as it lacks the vibrancy I am normally after in my models, BUT I learned a lot about many techniques I was using – primarily hairspray chipping, pigments, mud, oil mapping… I definitely put this experience to good use with my subsequent models – such as my T-80.