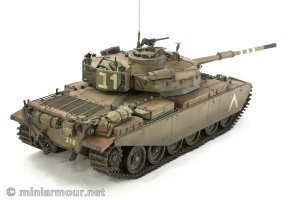 Shot Kal is one of my more recent models. I am a big fan of Israeli armour, I believe it has its distinct style and Shot Kal is no exception.

The kit is the AFV Centurion Shot Kal and depicts tank from the 7th Brigade during the Yom Kippur War of 1973.

AFV kit is not bad, but it has few significant downsides. The plastic that AFV uses is in my opinion too brittle, when I tried to remove the spare track links brackets’ parts (there are 4 of them, each very thin) from sprue, each single one has broken. AFV’s plastic will simply snap at slightest bend. So at the end I had to scratchbuild all of them.

I have replaced the turret with the resin one by LionMarc. Unlike the kit’s turret, this one is cast in one part, so you will save cleaning and masking few joins and the level of details is first class. The fit with the kit’s parts is perfect.

The detail on some parts (e.g. barrel lock at the rear hull) is in terms of details nowhere close to the rear vehicle. I strongly recommend to have some good reference literature to see the real vehicle in order to get the details right.

I must say that I have built this model shortly after AFV’s Churchill and afterwards I needed some break from the AFV kits, though quite detailed, they are bit too overcomplicated and not easy to build.

For the model I have used Voyager photoetch set. Some parts in this set are extremely fine (e.g. working locks on the stowage boxes on the turret sides), but there were also few problems with this set, mostly with the size of photoetch parts not being compatible with the kit parts’ size. For this reason I have omitted shovel from the tool set at the left rear hull – the photoetch bracket was just too huge for it and it would look weird.

I have replaced the molded-on tie-down cleats with the resin ones from Tiger model design (German version), if you can handle them (they are really delicate), they improve the level of detail significantly.

The model was on display for some time and unavoidably suffered some minor damage (broken antenna).

The tanks of the 7th Brigade wer posted on the Golan Heights during the Yom Kippur War and due to rainy weather this area was quite muddy in those days. I tried to reflect this in the way I have weathered the model, though I am not completely happy with the final look. 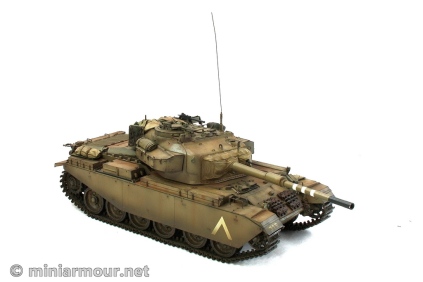 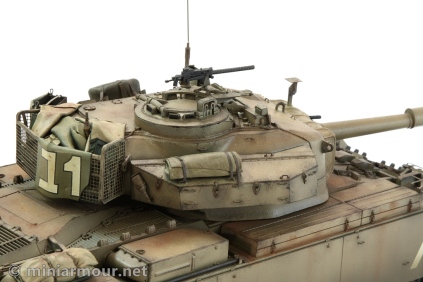 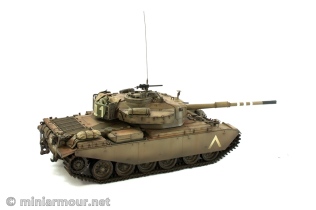 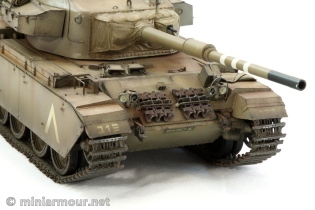 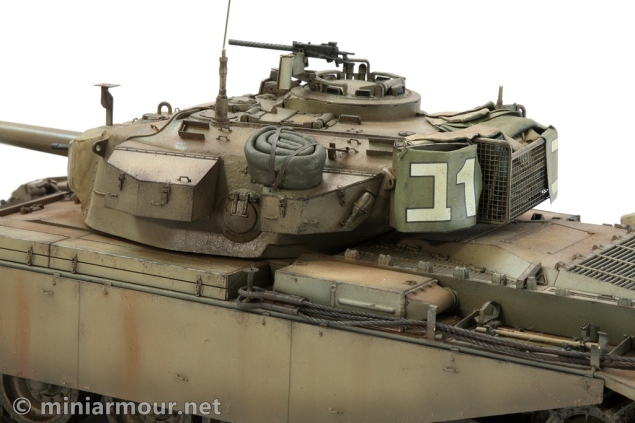