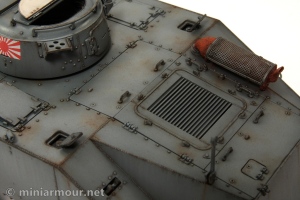 One of the last step I have been adding to the Ka-Mi is oil mapping. I am not sure if this is the correct name for this technique, but I use it when referring to it, as I don’t  know other name that would be commonly used. In one of my older posts I have linked a site to a similar technique used by Mike Rinaldi, which he christened Oil paint rendering (see here).

As name indicates I am using my trusty Winsor & Newton oils. As a first step I moisten the surface to which this effect is to be applied with oil thinner to prevent marks that oil paints could leave on matt surface. The paint finish most suitable for this technique is satin as the oil paint has to flow on the surface and should not get absorbed by the paint layer (at least not too much).

After this I apply small spots of oil paint on the surface at random, but logical places – in the corners, around surface details, such as hinges, holes, weld lines, etc. It is important to blend this technique with previous effects such as chipping – for example area surrounding chipped paint would likely be darker/dirtier as it is exposed to the activity that caused the chipping in the first place.

Afterwards I blend this oil paint spot with the surrounding area using a moistened brush. The goal is to create smooth transition between the spot and surrounding area. Use fine brush for this purpose (size 0-1) and carefully wipe out any paint absorbed by the brush after each single spot blending.

The paints I use for this effect are limited in range – Burned Umber for the darker spots and Naples Yellow for the lighter spots simulating dust and maybe one or two others, depending on the base colour. The effect is usually built in several applications, leaving sufficient drying time in between (at least 24 hours). This “layering” helps create effect that the vehicle has been out there for longer time and it does not look like all the weathering effects occurred overnight.

When using this technique, use the golden rule – less is more. The advantage is that by repeating the application and longer “blending” of the paint you are actually eliminating the effect, so the point is not to stop too early. If you feel that the you have lifted too much of the paint, simply reapply the technique again.

The immediate look after application, while the thinner is wet is somewhat darker and more visible that once the thinner dries. However be careful when using Naples Yellow – when dry it is much lighter than wet, which can result in an undesired contrast, especially on dark surfaces, such as grey.

Note that the pictures below were taken shortly after application of this technique, so the surface is still slightly glossy as it is moist with oil thinner.