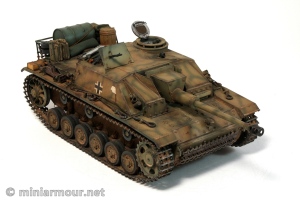 Another addition to the gallery of my models. This is Stug III G early version from Dragon. Again, I have built the model already some time ago. The kit was mostly built out of the box, no additional photoetch parts or tracks were used. I have added the stowage frame at the rear deck and the stowage pieces came from my spares box.

This model is unique as it is perhaps my only attempt a free hand painted camouflage. As far as I can recall, it took few attempts to get it right and some repainting in places, but at the end the look is quite fine.

One of the things I noticed is that the pigments used at the end of the weathering process significantly reduced contrast of the underlying paint job, so just a reminder to myself to use them sparingly.

The markings are those of Panzer Grenadier Division Grossdeutschland from Eastern front in 1943. 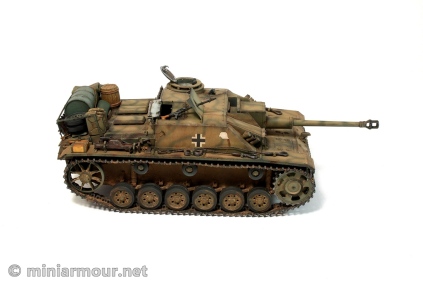