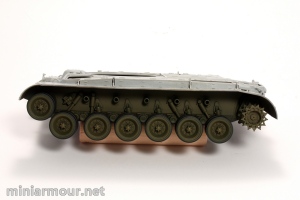 I have been making slow progress on the Pershing, mostly adding details. I have spent quite some time on the engine only to decide that the level of details is simply not good enough to my liking (I haven’t been able to paint some parts of it well enough as they are molded in one piece and are quite difficult to paint in detail) and decided that I will depict most of the engine hatches closed. I might leave some of the smaller ones at the rear open, but likely will decide depending on the look of it at the end.

Because Pershing has side skirts, the building process has to be structured so that the running gear can be painted and weathered before these are mounted, in a similar fashion to the Abrams, my other build in progress.

So after having all the pieces of the lower part of the hull in place, I proceeded to painting. This time I have skipped the primer (mostly for the practical reasons, I only have can primers, and prefer to apply it outside, but the weather is not so welcoming at this time of the year. I should try one of those Vallejo primers, that all the guys from AK are singing about…) and applied directly Tamiya Semi-Gloss Black X-18, that will serve as primer (glossy paint have better resistance against abrasion, so it should hopefully fulfill this purpose) as well as pre-shading. I also wanted to try to lessen the portion of Tamiya clear in the latter base coat layer and wanted to make sure that the layer underneath provides smooth foundation for this.

The colour still felt bit dark, so I decided to add another highlight, this time using Flat White (normally I don’t use it for lightening, but thought to give it a try) and Desert Yellow with the mix as follows: First highlight colour mixed as above + Flat White (XF-2): 2 parts + Desert Yellow (XF-59): 1 part.

This was closer to what I wanted in terms of brightness, though for the upper part of the model I will definitely add more highlights. Funny thing is that most of the above work will not really be seen, as I am adding weathering of the lower hull, which will cover most of the above mentioned work. But it helped me to select and test the colours for the rest of the model, so it wasn’t really wasted.