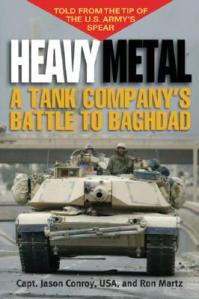 Being in the process of building and painting the M1A1 I wanted to find out more about the conflict in which this tank played a prominent role – the second Iraqi war or as it is being known – Operation Iraqi Freedom (OIF). There is plenty of literature out there to choose from, rather than going for a comprehensive book on the military aspect of this conflict, I was looking for a first-hand account of the conflict seen through the eyes of the US soldier in a Abrams tank. There are few books that I have discovered on Amazon, the first one was Takedown by Jim Lacey. Then I discovered that there are other books by his fellow soldiers, which I could download in Kindle version on my tablet and have decided for the Heavy Metal by Capt. Jason Conroy and Ron Martz. As the Captain of the Charlie company of the Task Force 1-64, Jason Conroy recounts his path with the company before the war – the time spent first on training in the US and then in Kuwait and then the active combat part of the war.  There were few facts in the book, that I have found interesting. First was the nature of the training the tankers underwent before the war, primarily the tactical and unit-level training in both the “normal” role as well as in the role of the opposition force.

Second was the theme that was often repeated in latter part of the book – Abrams is unquestionably one of the deadliest weapons in the current arsenal of any army – if it works. Capt. Conroy’s books clearly shows that often it does not. I was surprised how often during the combat phase of the OIF the tanks were disabled by mechanical problems and other tanks had to be used to recover them. Author retells the story of the (in)famous tank ‘Cojone,eh’ which was part of his company and was the only combat casualty during the first Thunder run. Given the number of photographs of this tank available (including those with the Iraqi Information Minister on Iraqi TV claiming destruction of the tank by the Iraqi forces), it was interesting to learn the whole story behind them.

In general, the story told is the one of one-sided conflict which, however, wasn’t such a walk in the park as is often being presented by the media. Given the might and reputation of the US armed forces it was surprising to learn that the material preparation and logistical support were not at the level where one would expect it to be in such force. But perhaps the most important failure was the one in the field of intelligence – US soldiers in Iraq were faced with completely different reality than was painted for them by the ‘experts’ before the war. One of the reasons was (again surprisingly) acknowledgment that the Iraqi army had learned its lessons from the first war with the US, whereby the US forces were lined up for the same type of conflict. They were suddenly faced with situations for which they haven’t trained and which they were told would not occur. I particularly like the story describing a tank fight in the Iraqi town of Mahmudiyah, where the us tanks were shooting at T-72 at practically point-blank range. During the training, shooting anything less than 1000 meters was considered dangerous.

I thoroughly enjoyed reading the book and can wholeheartedly recommend it to anybody interested in the modern armoured conflicts. (At 300 pages the book is reasonably long, so you will still have some time to build models.)

One more finding in relation to this topic – after reading this book I found out that a ‘Thunder Run’ movie is in the making (based on the another war memoir by David Zucchino), starring Gerard Butler, Sam Worthington and Matthew McConaughey…