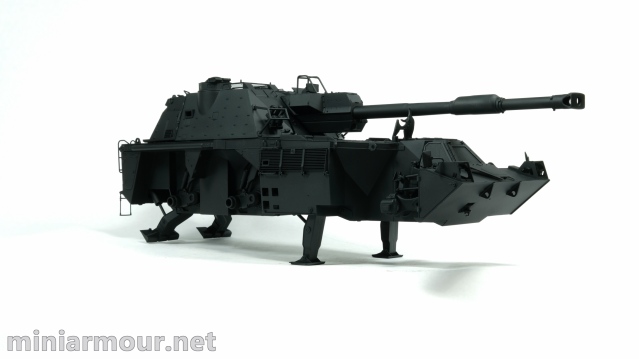 I made some progress on the Rhino.

Once the construction was done, i primed the model and preshaded with black. Since this particular piece is huge by any standard, I have decided to save myself some time and use spray can paint to apply the black coat. It went well, was much quicker than airbrushing it and result was very much the same. Perhaps the coat is bit more glossy, but that should not be a problem.

I have then decided to paint the vehicle in the three tone camouflage as it seems to be the one most often seen on pictures. For this I have decided to start with the pale colour which looked most authentic to my eye. This was little different choice from the previous camo jobs I did before as i would normally paint the darker tones and then mask off and follow up with the light one, mostly to make the masking easier due to the design of the camo.

So this time i went the other way around and as far as can say so far, it did make the masking of the subsequent coats more complicated, as I will show down the road….