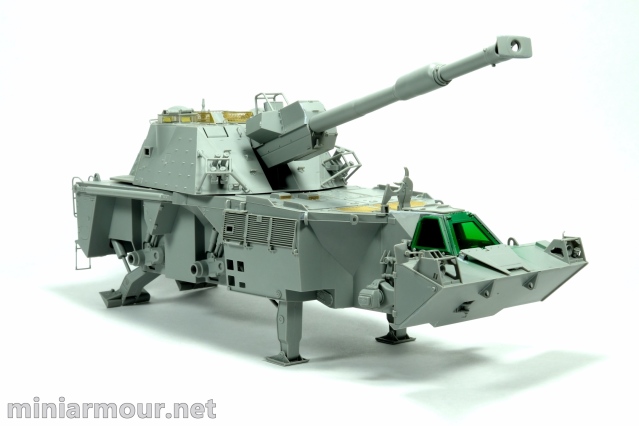 Now this is the beast that I have built over the past few months. It was something that I was looking at since it was announced way back, but somehow when the kit was released i had my bench full. Not that now it would be emptier, but I felt I need to catch up with this kit.

Sometimes I tend to avoid kits like these, where you need to build interior, paint it, then close it, mask it and then finish the construction and paint the rest. In this case I have decided to take it in stride and get it done.

The interior of the driver’s cabin, which is the only one provided in the kit, is bit simplified as can be expected, but there will be very little seen once it is enclosed and the glasses darkened and then weathered. So I took some time to get it painted properly, but did not go overboard in terms of weathering.

One thing that must be said is that the kit is huge. Some of the WWII models look tiny compared to it, even the AML 60 armored car that I have finished recently appears minuscule next to this giant.

The kit I think strikes good balance between the complexity and level of detail versus ease (and joy of) construction. I have not encountered any construction problems worth mentioning, parts go together very well. Kit also includes fair amount of photoetch parts. The final look is rather futuristic, which make the model stand out from the crowd.

(Mental note: watch out for those rear view side mirrors, as they stick out and tend to get broken during handling!)

The wheels cannot be attached to the hull without gluing them, so the painting and weathering will have to be done first.