This is another of my models, it was finished about two years ago. It is a Dragon kit to which I added photoetch parts. The kit was criticized on the web for its accuracy of interior, or rather lack of it. Can’t judge that aspect, but as a kit it went together rather well.

I decided to keep the plastic gun shields and not replace them with photoetch parts, as the kit parts’ molded on details are very well done. Bit tricky was the assembly of the spent ammo cartridges basket, which is made of two pre-formed photoetch parts that have to be soldered together.

Rear compartment hatches are also nicely done in the kit and are actually workable.

The model has rather generic markings, and in spite of the original plans to use a green camo, I felt that this would be too difficult to apply due to complexity of its outer surfaces. So instead I have focused on the chipping and weathering the surfaces.

The base was bit of an afterthought (as usually is with me). It is made of styrofoam and sides are cut from plasticard. Rubble was made of some bricks and other destroyed wall rubble from the spares box. To that I have added some pieces made of small piece of plaster cast in simple rectangular form and broken once dry.

Everything was painted in Tamiya acrylics. 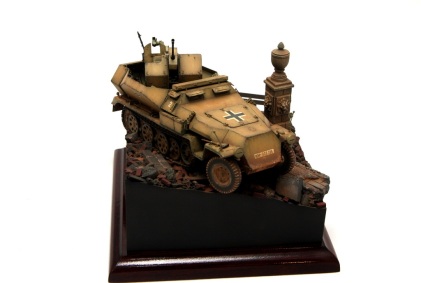