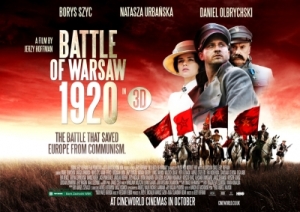 I learned about this movies in a usual way – accidentally. When shopping in a Polish grocery supermarket, I spotted a poster of this movie and after arriving home I checked the internet…

The movie is about rather unknown period of history and conflict which is usually overshadowed by the events of the two world wars which have framed it – chronologically as well as in the historical context. I will not attempt to go into the historical background of Polish-Soviet War and the events depicted in the movie (as usually, Wikipedia already did very good job – see here), I would rather highlight very good trailer, which makes me feel that this movie might be one of the better ones.

Based on what you can see in the trailer (or trailers, as there is more of them on YouTube), the movie includes some scenes involving armoured vehicles – mostly Renault FT-17 tanks and Russian armoured cars as far as I have spotted them. But even aside from these, the battles seem to be realistically shown and still realistic.

Using the information on the internet the movie is one of the most expensive Polish movies as it was filmed in 3D.

Below you can see the Polish version of the trailer, which I think is better than the English one. As far as I was able to find out, the movie was screened in few movies in Greater Toronto Area (West end). For DVD I will check the grocery supermarket again (they actually have small store with Polish books and movies).