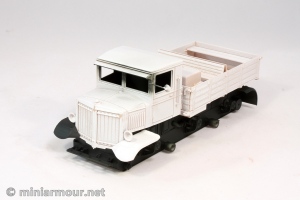 Having been working mostly on other things, I made some small progress  on the Voroshilovets.

Since I am not using the canvas provided in the kit, I had to fill the gap in the chassis, that would be visible from the top between the cab and the cargo bed. To do this I just cut rectangular piece of styrene and glued it between the side walls of the chassis/lower hull part.

I have primed the individual components using Tamiya’s white can primer as usual. I just gave it few quick oversprays, trying to avoid build-up of paint in between the surface details, as has happened to me before. The surface does not need to completely covered, there are few spots with the styrene still visible.

With extra fine sandpaper I cleaned the surface on the most visible areas to make sure it’s smooth. I then started to preshade the parts. I prefer to airbrush all the surface with dark color,  this time I have used Tamiya’s XF-69 NATO Black. It’s not as dark as the Flat Black, so it is easier to apply the base colour afterwards. I added about 20-30% of Tamiya X-22 Clear to make the finish smooth for subsequent paint layers.

So far I have applied preshading to cab interior and lower hull, which I kept separate from the cargo bed, so that it was easier to cover all the surface behind return rollers and upper surface of the rear fenders. After preshading, I glued the hull to the cargo bed part.

I preshaded inner walls of the cab, it was not that difficult, as I have not glued the windows in so far.

So now I have to finish pre-shading on the remaining parts.  Actually first I still need to fix some gaps, mostly around the attachment of the reflectors to the sides of the front grill.

Then I will have to come up with some nice shade of Russian green for base coat. Any ideas?