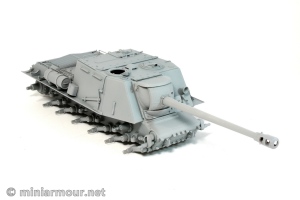 I always considered priming the model a bit of a milestone. Building phase is mostly finished and I can move on the real fun – painting, weathering,…

The same goes for the JSU, though this was (at least by my standards) a quick build. I haven’t gone crazy with aftermarket parts but added some details that make it somewhat unique.

Applying primer was quite straightforward. I used Tamiya’s grey can primer. This time with the help of a headlamp. Yesterday it was already 10pm, when I decided I am going to give it a try and since I didn’t want to smell the paint through the whole house I decided to do it outside (hoping no racoon shares my passion for armour models).

I apply the can primer using broad, quick passes, keeping about 4-6 inches from the model. I apply only one pass at a time, starting the paintflow in the direction away from the model and carrying on until completing passing the model and behind. This is to avoid build up of paint due to the initial burst from the can and at the end of the flow. I move at a speed of about 4-6 inches per second, again to avoid creating heavy layer of paint. Depending on the complexity of the vehicle shape I apply 10-15 passes until I feel the coverage is appropriate. It is NOT needed to completely cover the vehicle so that you cannot see the color of the styrene through. The point is rather to create a thin layer, to which the subsequent paint applications can “bite in”.

The primer I used dries extremely fast, it is touch dry in few minutes. I usually give it at least 24 hours before moving to the next steps.

I read in few articles that some modellers avoid applying primer fearing loss of the finer details on the vehicle surface. Somehow I never had this problem (unless I messed up and applied too much of the primer) and the benefit of having a paint that does not peel of the moment you touch the model is worth it.