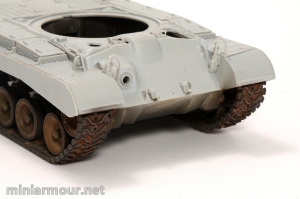 Having made decision to proceed with the kit’s tracks I moved to the painting phase. First I have applied the primer – this time I have Used Vallejo primer. I haven’t used it before, so I wanted to give it a try (if it’s good for Mig Jimenez, should be good for me too). The paint is relatively thick, so I thinned it a bit using Tamiya acrylic primer, after that it airbrushed quite easily. At the end I still got the airbrush clogged, but this was also due to the paint residue left from the previous paint jobs, so it cannot purely attributed to the Vallejo. But still, I don’t get this normally with Tamiya acrylics.

The primer seemed quite good in terms of adherence and smoothness of finish, so I continued with the acrylics – I airbrushed mix of Tamiya Flat Black and Flat Brown in 1:1 mix, the ratio is not that important, I just wanted dark colour with slightly warmer hue – black would be too dark by itself, Brown brings it more to the palette of tones normally observed in the nature.

This was followed by a light overspray with Flat Earth to lessen contrast with the pigments applied in the next step.

I put the tracks on the flat surface – I usually use one half of the box from an older kit, this avoids having pigments all over the place at the end. I dabbed the pigments on the outer face of the tracks in random pattern, using 3 different shades. After that I applied the Enamel odorless thinner to fix the pigments in place (temporarily). I left it dry overnight and devoted some time to the inner side – first I used make-up sponge brush to apply graphite along the length of the tracks on both sides of the guide horns, where the track surface would be polished by the wheels. Over this I have applied pigments – not so much as on the outer side, just a bit. I then spread the pigments along the length of the tracks using my finger and brush to simulate the thin layer of the dust on the inner side of the tracks and the dust that will accumulate in the gaps between the track links.

Here I started to run into trouble – as I was spreading the pigments with my finger, I found out that on some places, the paint started to rub of with the black rubber visible underneath. Afterwards I avoided applying strong pressure, but the painted started to peel of a bit in some places.

Being happy with the stage of weathering up to this point and with the intention to apply further pigments later, I mounted the tracks on the wheels. The process itself was pure torture, I must admit that was (as far as I can remember) the first time that I have used rubber tracks, so I wasn’t sure what to expect. I planned to join and glue the end of the tracks at the bottom (under the wheels) and then to use their flexibility to move the joint so that it will be hidden under the front end of the side skirt. Now that was the plan…

Here I mus also mention another issue I encountered before with the sprocket wheels. When I was testing the fit of the tracks to the sprockets I have discovered, that the teeth on the two halves of the wheels are misaligned. The reason was that the locating pin on one of the wheels did not snug into the corresponding slot on the other wheel perfectly, leaving some space for movement. I did not pay too much attention to it at that time. More trouble… I had to use saw to cut the two halves separate and realign them…

Now back to the process of mounting the tracks on the tank – as a result of moving the track joint, I was left with more paint rubbed off. Luckily, the black rubber is hard to distinguish against the dark paint, so it is not very visible, but I will still have to apply another paint coat to fix this.

One more issue I will have to deal with is that the tracks have along the both sides quite visible mold seam. I have sanded it, but apparently non enough, because it is still visible. I will have to touch this up a bit and repaint.

If I should summarize at this point, the tracks are definitely the weakest part of the kit and Hobby Boss should seriously address this. Normally I would recommend to throw these tracks into garbage bin, but with only one alternative available – AFV’s workable tracks, this decision is not so simple.